#1: What is OM? A baseline EEG study of the mechanisms of OM

This is the first study in the U.S. since Masters and Johnson to focus on partnered stimulation. The study, using a total of 260 participants, monitored their physical and mental responses before, during and after the practice. It is the first study of its kind to use EEG and to measure both participants. In November of 2016, the study was approved by the Institutional Review Board (IRB) at University of Pittsburgh, becoming the first partnered stimulation study granted IRB approval. The study was completed in December of 2017. The results are currently being analyzed. Two peer reviewed papers have been published from this study thus far.

This study suggests the benefits of OM might be:

Roland Griffiths, a Professor in the Departments of Psychiatry and Neurosciences at the Johns Hopkins School of Medicine, developed a 30 question “Mystical Experience Questionnaire”, or MEQ30, which provides a validated and quantitative measure of mystical experience. This survey is fundamental to studying and understanding the healing abilities of psychedelics at Universities around the world.

This questionnaire was used by Siegel to measure over 780 practitioners of Orgasmic Meditation with an age range from under 30 to over 80.

The MEQ measures four different aspects of the mystical experience: mystical (feelings of oneness); transcendence (loss of boundaries of time and space); ineffability (inability to put the experience into words); and positive mood.

In short, the results:

20 pairs of individuals were studied, scanning both the ‘stroker’ as well as the ‘strokee’. Subjects initially had an intravenous catheter placed in their arm and then after approximately 15-20 minutes, began the OM practice. Half way through the practice, the individuals were injected with the radioactive tracer, 18F Fluorodeoxyglucose (FDG), in order to measure changes in cerebral glucose metabolism associated with the OM practice. Scans captured changes that occur from the moment of injection during the OM practice itself. In addition, fMRI data was obtained to assess changes in functional connectivity and overall brain activity after the OM practice. The OM practice was directly compared to a “baseline” state in which similar movements and contact occur between the two individuals, but the actual practice and stimulation was not performed.

Quantitative analysis was performed on both the PET and fMRI scans to measure the physiological effects of the OM practice. In addition, several qualitative questionnaires were completed in order to assess the subjective intensity and quality of the experience. The primary aims were:

Aim 1. To evaluate the neurophysiological effects of OM on the stroker (giver) and strokee (receiver) using a combination of PET and fMRI, along with autonomic nervous system effects.

Aim 2. To correlate FDG PET and fMRI with the subjective effects that occur during OM.

The results of Orgasmic Meditation in this study revealed:

The team found significant differences in functional brain connectivity between active OM and the control activity. OM led to changes in a long list of brain areas, including those associated with focus and flow, spatial representation of the self or self-transcendence and both meditation and sexual stimulation. Newberg said the responses more closely resembled reactions to religious and spiritual practices than purely sexual experiences.

In addition, initial observation suggests that many regions of the brain appear to have structurally changed in size in long term practitioners vs non practitioners – which will be a topic of further research.

*Dr Andrew is preparing a book based on this study.

Over 200 people responded to this survey who had personal experience with Orgasmic Meditation, sex, sitting meditation, and fondling which asked to describe and compare each of these activities. This study was IRB approved and contained a series of multiple choice, open field, and likert scale responses. The hypothesis was that people would find OM more like meditation than sex or fondling. The results showed that participants found Orgasmic Meditation to not correlate to be like sex. 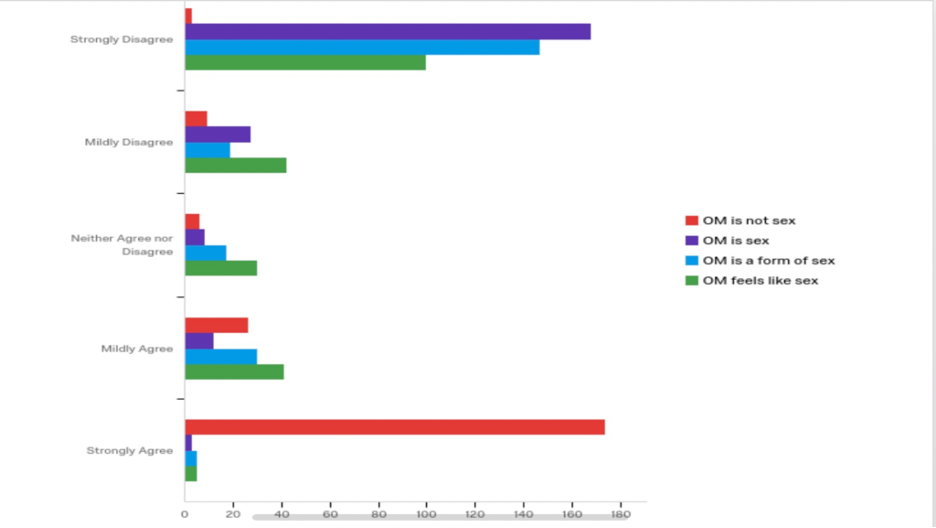 This is a small, independent-IRB approved study using advanced practitioners of Orgasmic Meditation as participants.

This study involves tracking mood, sleep and OM through a phone app to chart how OM impacts participants’ sleep cycle and mood. There were 44 participants who tracked their frequency of OMs every day.

This study’s results have shown signs of decreased sleep time and increased sleep quality in participants who are practicing Orgasmic Meditation.

This study looked at self-reported, written journals of Orgasmic Meditation from 50 practitioners. Of the 1,506 journals, 954 which were from ‘strokees’ and 522 from ‘strokers’ and the goal of this study was to investigate the technique of OM, the changes people report and the experiences people were having. This study was aimed at further understanding the potential physical and psychological benefits of Orgasmic Meditation.

The results of common experience are organized into two sections: Stroker and Strokee. Four themes emerged for both groups. There were no common themes between the two groups.

#1: OM and Dopamine as it relates to Parkinson’s Disease

Parkinson’s disease (PD) is a devastating neurodegenerative disorder of unknown cause that affects more than a million Americans. The most prominent PD pathology is degeneration of dopaminergic neurons in the ventrolateral tier of the pars compacta of the substantia nigra in the midbrain, and the formation of α-synuclein cytoplasmic inclusions, termed Lewy bodies, throughout the brain. Unfortunately, by the time of clinical diagnosis, substantial neural damage has been wrought, with an 80% reduction in striatal dopamine and a 60-70% reduction of the neurons in the substantia nigra. It is believed that oxidative stress and inflammation play an important role in the pathophysiology of PD.

The purpose of this study is to evaluate the potential affects the OM practice (which has been shown to alter brain function in the FDG PET study) may have on dopamine and dopamine related structures and function in the brain over a period of 3 months. Participants with PD will be evaluated with FDOPA PET-MRI imaging initially and after 3 months of doing either daily OM practice or being placed in the waitlist control group. The primary aims are the following:

Aim 1. To evaluate the neurophysiological effects of OM in patients with Parkinson’s disease using a combination of FDOPA PET and fMRI. An initial pilot study of up to 10 controls (which may be split into 5 controls and 5 PD patients) will be performed first to confirm feasibility and also determine the effect size on the dopamine system of doing the OM practice.

Aim 2. To correlate clinical improvement in Parkinson’s disease with dopaminergic changes that occur as the result of practicing OM.

The study of the OM Trauma Protocol (OMTP).

The OMTP is designed to systematize the application of Orgasmic Meditation (OM) for individuals seeking relief from a wide variety of problems, or even just to help them in their pursuit of eudaimonia. This study will evaluate the effectiveness of OM as part of a systematic practice that includes other interventions — such as an emotional support (ES) group — for people suffering from Post Traumatic Stress Disorder (PTSD).

The OMTP is a method that aims to create sustainable change in individuals by using the arousal state to create a powerful emotional experience that can open a nervous system and body that has locked down by trauma, all while positively reinforcing human connection that has been lost in trauma. This method would allow the build-up of traumatic tension in the body to be catalyzed and used as fuel for enhanced states of consciousness.

This is a study of 30 couples over a period of 1 month as they practice OM regularly and participate in talk therapy. The participants trauma levels will be measured through the month as well as their level of tumescence.

IRB Approval not yet submitted
With University of Pittsburgh
Greg Siegle, PhD

This study aims to evaluate the potential utility of Integrative Breathwork (IB) and Orgasmic Meditation (OM) as novel interventions for Major Depressive Disorder.

120 individuals in committed, cohabitating relationships (i.e. 60 couples) will be randomized with 1-to-1-to-1 allocation to IB training, OM training or a wait-list control condition (20 couples randomized to IB; 20 couples randomized to OM; 20 couples randomized to wait list). Enrollment and randomization will occur on a couple-by-couple basis. In addition to being involved in a committed, cohabitating relationship, eligibility criteria will include that 1) both members of the couple are adults between the ages of 21 and 65; 2) at least one member of the couple is a biological female (a requirement for OM); and 3) one member of the couple meets DSM-5 criteria for Major Depressive Disorder (MDD) of at least 30 days duration with an Inventory of Depressive Symptomatology—Self Report (IDS-SR) score ≥26 and both members of the couple are willing to complete at least one IB/OM training session per week for the first four weeks of the study.

Subjects taking medications for their depression will be asked to be on a stable dose of these medications for 8 weeks prior to screening and will be asked not to make changes to their medication regimen during the study period. Similarly, subjects receiving psychotherapy will be required to have been in therapy with the same therapist for at least 8 weeks prior to screening. The baseline assessment will be required to be conducted within 35 days of prescreening.

IRB Approval not yet submitted
Dr. Peter Hendricks, MD at the University of Alabama

This study is designed to look at couples and their use of Orgasmic Meditation as a tool to aide in the cessation of smoking tobacco.